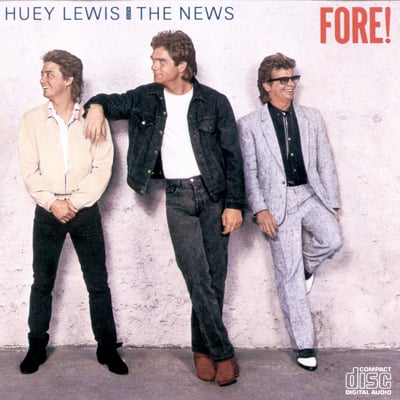 "Stuck with You" was released in 1986 and was the first single from the band's fourth album, Fore! The song spent three weeks at number one on the Billboard Hot 100 and was the band's second #1 hit on the Hot 100 chart, following "The Power of Love" in 1985. The song reached number 12 on the UK Singles Chart, making it one of their biggest hits there.

"Doing It All for My Baby" peaked at #6 on the U.S. Billboard Hot 100, becoming the fifth top-ten hit from the album and making the band the first group to have five top-ten Hot 100 singles from one album.

"I Know What I Like" was released as the fourth single from the album and peaked at #9 on the U.S. Billboard Hot 100. Like the earlier single, "Hip to Be Square," "I Know What I Like" featured background performances by then-San Francisco 49ers, Dwight Clark, Riki Ellison, Ronnie Lott, and Joe Montana.

Produced by Huey Lewis and the News